HEF to host 2019 Dancing with Your Hermiston Stars 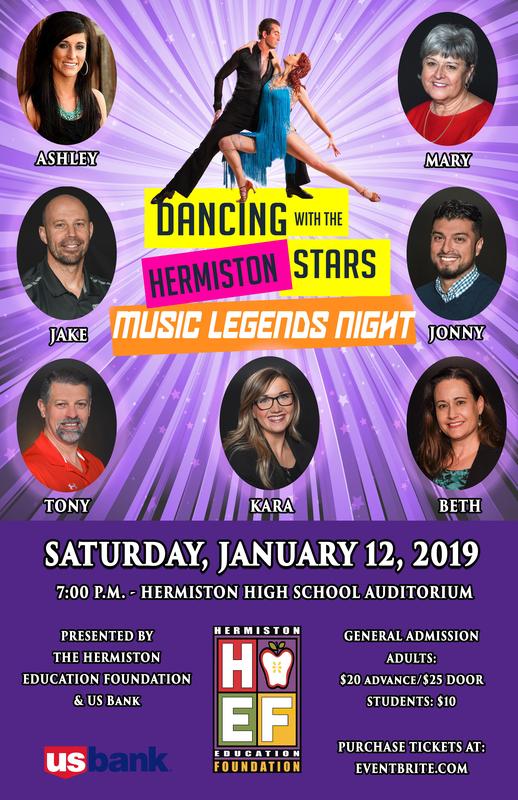 Hermiston Education Foundation has taken over the reins for the Dancing with the Hermiston Stars event for 2019. It is scheduled for Saturday, January 12, 2019, in the Hermiston High School.

Tickets are available for purchase by clicking here.

The seven dancers participating are below. To financially donate in support of a dancer, visit the HEF Square Store.

Beth Anderson, or “Dr. A.” as her students call her, recently returned to her hometown to teach and direct plays at HHS. In the not so distant past, she loved making a fool of herself on stage as an actor in college and beyond; she also pursued the “spicier” side of the law as a divorce attorney in St. Louis, Missouri.

Beth hopes her performance in Dancing with the Hermiston Stars ends with less tears than her only other dance performance to date: a tap routine in “I’m a Little Teapot” when she was six.

Beth would to dedicate this performance to her nieces and nephews, who love to tell her how clumsy she is.

Beth is dancing for the Hermiston Education Foundation, whose mission is to encourage and enhance the academic, artistic, and cultural learning experiences and opportunities for the students of the Hermiston School District through community and corporate support.

Jake Bacon, is a self-proclaimed “bald and happy” man who loves the outdoors and spending time with his family. He is a father of three kids and two dogs and husband to an amazing wife. He grew up in the Ione/Heppner area, attended Eastern Oregon University, and study online through Walden University, before earning his administrative credential from Lewis and Clark College.

Jake is dancing for Kiwanis Club of Hermiston, which is dedicated to improving the lives of children one community at time. How fitting for a “kid at heart” elementary school principal! Jake has 19 years’ experience in education, including teaching physical education and health, middle school science and English, and high school speech, along with coaching football, basketball and track.

Jonny Badillo Guerrero, with his contagious charisma and bubbly personality, has never met a stranger and is often found with a kind work and smile. He is a Washington State University graduate, where he studied Business Administration management and operations. As a WSU student, Jonny was a strong advocate for minorities within the university and mentored at risk high school students.

Jonny still has a heart for the less fortunate and he dances on behalf of CASA (Court Appointed Special Advocates, whose mission is to advocate for safe, permanent, loving homes, for all children in foster care in our communities.

Jonny is a supervisor for Healthy Families Oregon and Early Head Start MIECHV (Maternal, Infant, and Early Childhood Home Visiting) programs for Umatilla-Morrow County Head Start. Previously he was a family advocate and facilitated parenting classes and advocated for parents within the community.

Kara Frazier, also known as “Care Bear” to her family, is known to be a woman with a heart of gold. It’s no wonder that she volunteers for the Made to Thrive Organization, taking time to empower vulnerable youth through sports, activities, music and art.

Kara embodies that mission each day, as an active, hands-on, dance and wrestling mom to her two young children. She also actively supports her husband’s train to hunt and racing endeavors. When not being a fabulous mother and wife, Kara is inspiring and changing lives of first grade students as a Desert View Elementary School teacher.

Kara graduated from Eastern Oregon and received her Master’s degree from North Central University. Before entering education, Kara worked in Portland’s Pearl District as a prestigious hairstylist. She still uses this artistic talent in her home, bringing smiles to others who can’t otherwise afford this service.

Tony Garberg is dancing for the Rotary Club of Hermiston, for which he is the current president. Tony serves as the Oregon Society for Respiratory Care’s Political Advocacy Team chair and the Health Licensing Office liaison, which allows him to represent his profession every year in Washington D.C. as a political advocate. He also serves as a member of the Oregon State Respiratory Therapy and Plysomnography licensing board. Needless to say, he appreciates his family’s tolerance of his busy schedule.

Tony grew up in the Tri-Cities area, Benton City, and has served in two branches of the military: the United States Coast Guard as an aviation structural mechanic and the Army Reserves as a combat medic and respiratory therapist. By day, he is the Director of Cardiopulmonary Services at Good Shepherd Medical Center.

Tony is a giving man, who is supported by a loving wife (Jodi), three children (Jordan, Austin, and Addison), a granddaughter (Charlotte), and a son in-law (Logan). He loves spending time outdoors with his family and his baseball teams. Tony has coached youth sports since he was 16, and he continues to do so. Tony is dancing on behalf on Rotary, in support of the Pioneer Relief Nursery, to prevent child abuse.

Ashley Umbarger, is dancing for Campus Life, a program that she attended in high school and helped to keep her engaged and gave her great mentors and memories.

Ashley married her husband Jeff five years ago, and the couple feels they were called to help young teens overcome troubles that life can bring. They previously worked at a youth ranch for troubled teen boys, and in August, they moved back to Hermiston to be the executive directors of Campus Life. Their goal is to keep students off the streets and out of trouble while engaging them in meaningful relationships. As a safe environment for young teens to hang out, Campus Life has games, food, activities, summer camps, and many other opportunities.

Ashley grew up in Southern Oregon and moved to Hermiston in 8th grade. She is glad to be back “home” with her husband and give back to the community and students, through a program that had such an impact on her.

Mary Winebarger, moved to Hermiston in 2010, when she married her husband Greg. She wanted to be more involved in the community, and in the spring of 2017, Mary became at Altrusan. Being a semi-retired bookkeeper, she filled the open treasurer post for Altrusa, a role she still serves.

Mary has two daughters. One lives in Bermuda and the other resides in Colorado. Mary is fortunate to occasionally visit both, either taking in a bit of island beach or two grandsons. By marriage, Mary has another daughter who, along with her husband and three children, lives just two hours away in Hood River.

In her casual time, Mary enjoys taking daily walks, playing cards and tennis. Mary says, “Life is not a thrill-a-minute for me, but it is Good!”

Thank you to the following event sponsors: